For most people salary negotiations are like a blind date. You hope things go well, that your opposite number is attentive and that they give you something more than a polite handshake and “Let’s stay in touch” upon parting. But there’s no way to be sure.

In fact, most people who’ve been on a blind date know that one person usually winds up controlling the narrative because they’re either hot or rich or a little bit smarter and just snarky enough to take advantage of that fact.

What you want to avoid like the plague is the salary negotiation that turns into that one-sided blind date with you, of course, picking up the tab and telling yourself she forgot to take the flowers because she had a lot on her mind. Sure she did.

It’s pretty well recognized that nobody does one-sided blind dates better than Big G. The Internet is rife with those who’ve come out of salary negotiations with Google thinking they were going to get a big smooch but instead got a disingenuous half smile and “I just don’t think about you that way”.

One of Google’s favorite ways to set you up to believe you’re about to get lucky is by dangling their vaunted food benefit in front of you.

Here’s how it works:

Big G: “Have you heard about our food benefit big boy?”

At this point you feel a foot slowly run up your leg under the interview table.

Big G: “Sure. You know our food benefit alone is worth $X a month and you can be sure it’s all super-delicious, high-quality comestibles.”

You (beginning to sweat and envisioning sumptuous banquets of corporate love): “Gee. That uh, sounds pretty good. Will, uh, will you be… joining me?”

A month later your free meals are harder to find than a virgin at a disco and that HR drone who seduced you has moved on to someone new. So what happened here?

What happened is that you fell for Ye Olde Benefit Mirage. Big G dragged out something they already give away for free and stuck a value on it in order to try and give the appearance they were moving in your direction.

They weren’t of course but you were so taken off guard by their pseudo value-added proposition that you let them wrest control of the negotiation from you. (Later, they’ll slowly withdraw the “perk” because, after all, they never said they wouldn’t.)

So what’s the lesson here? Well, first of all never negotiate with someone who’s running their toes seductively up your pants leg and second, recognize the trap that’s being laid for you and politely sidestep it.

Big G: “You know our food benefit alone is worth $X a month and you can be sure it’s all super delicious, high-quality comestibles.”

You: “You know if I could pay my mortgage in arugula that might interest me.”

See how easy that is! Everyone laughs. The HR drone has new respect for your negotiating skills and no one is left holding a bouquet of dying flowers at the end of the night. 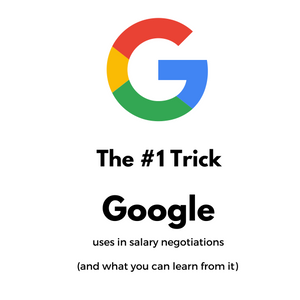